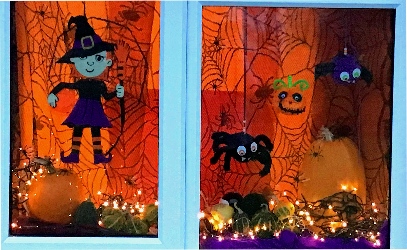 In previous years volunteers have organised a group Halloween Walk around the village, however we were unable to do this in 2020 due to social distancing.

We therefore came up with the idea of a Halloween Trail during Autumn half term, 19th – 30th October, which could raise funds for Eastington School.

The trail featured 26 houses who put up some amazing and terrifying displays at their homes with some spooktacular ghosts, skeletons, spiders, pumpkins and other ghoulish creations.

We sold over 200 maps meaning we had over 200 people doing the trail despite the terrible weather, and claiming their treat by collecting the letters to make the phrase “Double double toil and trouble” from Song of the Witches in Macbeth.

A huge thanks to The Old Badger who did an amazing job of map sales and dishing out the treats to the successful trailers. And thanks too for all those who spent time decorating their houses so brilliantly.

Fund raising during these challenging times is difficult, so we are thrilled that with the support of the village we were able to raise £445 for the school.

And here are  two parts of a huge display by Ali Louise in Newtown which raised £165 for Teckles. She says “I’ve never decorated for Halloween before, but after the year we have all endured I thought it would cheer people up when passing through Newtown …..The kids loved it !”