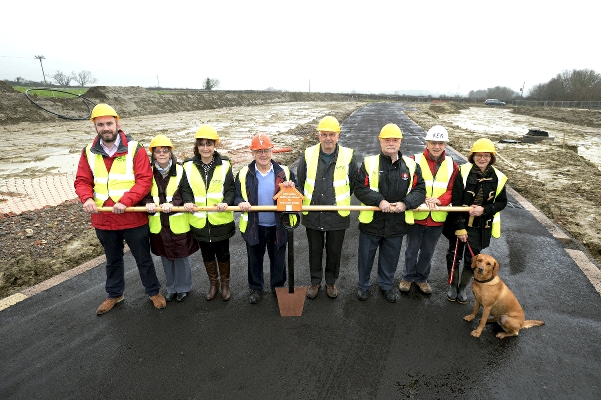 We were delighted to celebrate the start of work at Puddleworth Close with millions of people watching BBC News on 1st January. It was the “good news” story at the top of the Points West broadcast and featured the ECLT Trustees with their ceremonial Golden Spade, supposedly breaking the turf.   Of course the election had forced the postponement but we celebrated anyway, with representatives from the Parish Council, Stroud DC, Aster Homes, EG Carter and our main benefactor, Homes England.

Progress has been to schedule despite the weather. The critical spine road was completed before Christmas (see top pic) and work on the acoustic fence is well advanced. The photo shows the fence posts standing in fast-drying cement with half the panels fixed on 15th January.
On the left centre of the picture, the outline of the footings dug for plots 21 and 22 can also be seen – completely flooded! Again, modern cement formulations were able to cope, drying fast after the water had been pumped out. Overall completion is still expected towards the end of 2020