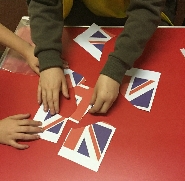 The brownies are really enjoying the new brownie programme and so far we have:

● practised striking matches to light a tea light
● completed an obstacle first aid course wearing home made slings
● practised guide exercise drills of yesterday
● learnt about how the union jack is made up
● hand sewn our own badge with blanket stitch
● discussed what characters make a good friend.

Last week we took part in Parliament Week as part of the national campaign.

UK Parliament Week (12-18 Nov 2018) is an annual festival that engages people and groups from across the UK with Parliament. It has has been developed by the Houses of Parliament as part of its Education and Engagement Service.
See www.ukparliamentweek.org

We made placards like the real suffragettes did, and played a game where they ruled their own island and had to decide what they wanted to keep to survive. From a selection of available items they chose the fishing rod, cooking utensils, a tarpaulin, water purification tablets, matches and first aid equipment – they were very sensible about not taking the dog. Our brownies who are ready for guides really came forward and demonstrated their leadership qualities. We were struck how knowledgeable they were about democracy, and heartened that the next generation will step up and play a role in

The Leaders have been busy too, as the girls challenged us each to do one of the new interest badges ourselves and to present them at brownies, using 1 of the 105 ways to show badge work. I’m doing the Zero Waste badge, Snowy Owl is working on the Charities badge and Barn Owl the Stargazer badge. I do hope the brownies award them to us!

The real excitement is in the planning for our sleep over in January – the girls selected the themes and then voted, with Mamma Mia an outright winner, so we are talking about Swedish food and gradually planning the event, with a parents evening planned for later in the month.