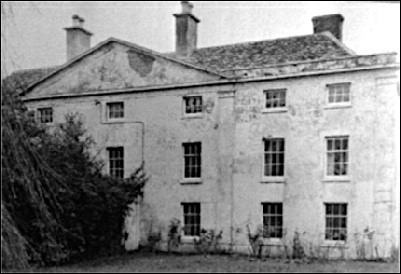 In April 2016, in ECN 156, Steve Mills wrote an article for us about the now demolished Alkerton House, which once dominated the centre of the village.

Click this link to dive into the ECN history archives to see Steve’s original article.

The article was picked up by  Simon Newton-Smith who wrote to us to say that his family were tenants there in the early 50s, alongside Mr A. Keyes.  Simon is has kindly written the following piece for us describing his happy times there.

At the age of 70 I have made the decision to write an autobiography (for the benefit of my family). It is amazing that, once you sit down and think about your life, how the memories flood back. My father was a civil servant with M.A.F.F. and every three years he was moved. So as a 6 / 7 year (mid 1950’s) old it was quite a shock to move from a relatively modern council house in Oxford to Alkerton House where we were tenants of Alfred Keys J.P. I remember him as a kindly elderly gentleman much a kin to Beatrice Potter’s Mr McGregor, in a suit and waist coat but not a tie.

The grounds extended from the Cross to what is now the Old Badger Inn. The footprint of the house was very similar to that shown on the OS map of 1888 and when the property was split I guess it was ⅓ Mr Keys and ⅔ for the tenant although not all of it was residential. There was quite a difference between the front (entrance from the Bath Road) and the rear from Alkerton Road.

Coming into the grounds from the Bath Road, a pedestrian gate between a thick hedge you were greeted by this amazing whale bone arch, to the left stood a mature weeping willow the boundary to the left, between him and us,  was a mature hedge which led up to what might have been the original front door, in front was an expanse of lawn underneath the three columns of windows. To the left the dining room and the two others the sitting room. On the right side of the house was the side door (front door) and to the right of that was a copse hiding some outbuildings and further to the right the path took you passed a pond surrounded by crab apple trees and eventually to the orchard and round the back to the rear entrance.

Entering the house through the front door took you to a corridor; on the immediate left was one of 2 doors to the sitting room. Following the corridor, took you to the back of the house and a second door to the sitting room, a further door, on the left, to the dinning room with parquet floor. I think the corridor became a cul-de-sac but in front was the stairs and to the right a door to the “front kitchen” I don’t know what else to call it. It had a traditional range, a door to the courtyard and a door to the back kitchen.  All the rooms were enormous, an electric stove was lost in the back kitchen. Beside the range in the front kitchen was a small door taking you to what was the servant’s stairs but my access to my bedroom and behind that my play room. Each having a coal fire. there was a second floor, which originally was the servants quarters but where we kept apples and other fruits. The only problem was that some floor boards were missing. These were replaced only to find that, few days later, they got ripped up. In A E Keys’ book “A History of Eastington” he mentions that the house was rebuilt several times however we were told that previous owners were superstitious and actually removed the roof and turned it round to ward off evil spirits.

The house did have electricity however there was no bathroom so we had a tin bath and washed in the front kitchen. Exiting the front kitchen through the back door took us into an uncovered courtyard. Immediately in front of us there was access round to the left to Mr Keys’ walled vegetable garden (almost a market garden), it was enormous. We were welcome to help ourselves to any of the produce, his favourite vegetable was the Jerusalem Artichoke. he had a number of tool / potting sheds. Back in the courtyard and opposite the back door was a toilet and to the right a workshop with a range of tools. Exiting the courtyard and on the right were the out buildings which included at the end, a cider press. I wish I had a photograph of that, it was more like a stone mill that was turned by a donkey. So now we have reached the path from the front. Immediately ahead was the orchard but slightly forward and to the left was a grassed area with open sheds containing a wide range of farm implements and against the far wall was was a hay loft. To the left was a lane taking us up to Alkerton Road at the far end on the left was the coach house where Mr Keys kept his car. Across the road was a shop which I think is now called “Eastington McW”.

My father didn’t drive so I can only assume that he relied on buses to go to work at Gloucester. We walked to most places including the River Severn via Frampton and of course avoiding the quick sands. In the winter we went sledging in the fields off Spring Hill. In the summer the rectory held various events / fetes. As a special treat we might go to Cam Peak and slide down on a tray and we might even catch the train from the old Stonehouse Railway Station to Weston-Super-Mare making sure of course not to trap fingers in the slam doors. In Eastington I learnt one of life’s most important lessons; always make friends with the school cooks. I have vivid memories at school of queuing at the kitchen window when bacon was being cooked. Most unacceptable these days, but the cooks cut of the rind and crisped it up for the benefit of the children! Whilst we were there the Bath Road was resurfaced using a steam engine roller! How times have changed. And finally May Day celebrations started at a farm, on the right, in Alkerton Road in the direction of Clay Pits. We May Pole danced our way through the village to a farm in Upend. The May Queen travelled by horse, a cart horse I think.

A watercolour by Simon’s father.