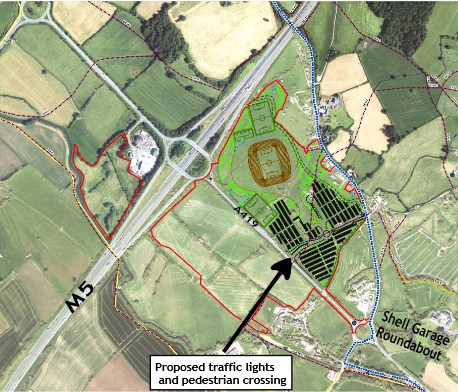 Following discussions with Stroud District Planners,  Ecotricity have been advised that their original proposal would not fly and so  have amended their planning application.

It retains the original planning reference  S.16/0043/OUT
The planning application no longer includes any employment/business park and the proposed Nature Conservation Area to the west of the M5 has been removed.
The ‘Sports Complex’ has been reduced in scale and repositioned to the north of the A419 as shown

Consequently, this outline application is now  ‘just’  for a replacement 5,000 capacity stadium for Forest Green Rovers Football Club (FGRFC) Including  a Club Shop, food and beverage facilities, a health and fitness suite all purely for FGRFC as well as training /conference rooms and office space for FGRFC staff.

The proposal also includes two full size grass training pitches, a goal practice area, parking for around 1,740 cars, and parking for coaches and bicycles.  A parkland setting is envisaged with the planting of some additional 500 trees and 1.8km of new hedgerows. In addition full planning permission is being sought for traffic light controlled access off the A419, including a pedestrian crossing, and a foot/cycleway along the south side of the A419 with some  reinstatement of the hedges and lay-bys.

It should be noted that some of this work will be provided under the Gloucestershire Growth Deal, wherein the Government has already agreed to invest £4.4m by 2021 via GFirst LEP for junction improvements and carriageway widening within the A419.  This  was meant to provide necessary improvements to the road before any effects of the stadium were considered.
It should also be noted that all pretence of a ‘public amenity’ for sporting activity  has been dropped, and the whole project is entirely for the benefit of Forest Green Rovers.

The upside of this is that activity should be limited to Saturday afternoons and the occasional Tuesday evening.  The Downside is that it will sit empty, as a white elephant,  for the rest of the time  – until FGR decide to make some cash by renting it out for goodness-only-knows-what purposes when they run out of money.

From our point of view the new proposal is an improvement (for the moment!) on the old.  The business park was really the greater threat in terms of traffic and general nuisance.  However, it would be naive to believe that this threat has gone away!

The main problem is that when  the revision of the Local Plan coming along (effective 2023), these sites – both North and South of the A419 – may well be included as possible ‘strategic’ development sites.   If this occurs, it will make it much harder to argue against any development on them.    It is hard to understand how a football stadium of such limited appeal might in any way be considered a ‘strategic’ development,  but we seem to have to demonstrate this.  In any case, the revised Local Plan cannot come into force before 2023, so any planning permission that allows work to commence before this is still contravening the Local Plan as it stands.

Everyone opposed to this new application should make a FRESH objection on the Stroud planning website (same ref no S.16/0043/OUT ) or, if you are experiencing problems with the website (and it has been ‘difficult’ lately) you may email the planners directly at david.lowin@stroud.govuk – or write to The Planning Office at Ebley Mill, Stroud.