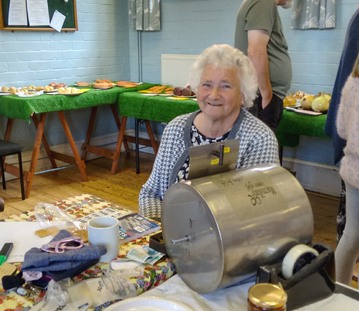 This was very well attended, well up on last year, and with 179 entries in all, it is not surprising that there was plenty to admire.
There seemed to be entries in most of the classes, and plenty of ‘Firsts’ were awarded.

The overall winner, with both the the ‘most points’ and the ‘best in show’ was Mr R Hughes.
He was awarded the President’s Cup, the Stroud Building Society Cup and the Bill Fletcher Memorial Trophy.

Runner up in the top categories was Mrs Liz Hughes (no relation!), Who was also awarded The J Bridges Trophy.

The President’s Rose bowl , the Perpetual trophy for most points in the cookery section and the C Haines trophy for ‘Best Orchid’ were all awarded to Queenie Jones – who has worked tirelessly over many years to make this show a success – and who was also in charge of the Tombola amongst other things!

(L to R) Di Davies was runner up for the President’s Rose Bowl; Mr H Smith won the Joan Pariles Trophy and the Village Hall Cup for Allotment prowess; Ms Kim While won the Underwood Trophy for her tomatoes and Mr D Ashby was awarded the trophy for ‘Best Runner Beans’.

There were some charming entries in the Children’s sections, and some very talented youngsters about the place!
Otto Hayward was awarded the Bill Fletcher shield for his delightful family of strawberry mice

…and then there were also these delightful creations to admire.

Becky Ogle won the Moss trophy for these Shaun the Sheep cakes.

Ms M Hayward (above,left) won a trophy for her colouring work and Ms Laila Farrugia (below) swept the rest of the board , taking the Neale Trophy, The Parish Council Trophy and the Class 51 trophy for her handiwork.

There were, of course many, many other delighted entrants who walked away with a ‘First’ prize for their produce – including Betty Barnfield, Ed Davies, Gary Dingle, Jacqui Dingle, Alice Elliot, Dale Haines, Liz Haines, Simon Harris, Shaun Ireland, Kate Livingstone, Tom Low, Jo Pegler, Anna Marie Smart, Howard Smith, Helen Whitehead and E Wroe (apologies if I have missed you out!) –
– But the fun is all in the taking part, and keeping this very old Eastington tradition alive

The afternoon was brought to a close by the President, Lt Cdr W. R. Harris, – to whom, along with the stalwart members of the Jones and Haines families who do so much of the hard work – we say “Thank You for a great show” and “See you in the Spring”!