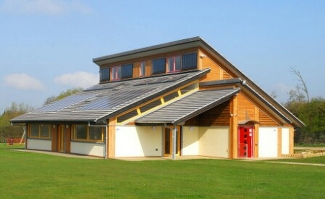 In the last article, in 2001 ESCA had folded. The task of keeping the Village Hall going alongside trying to repair/improve the pavilion was overwhelming and life goes on, people moved on for other reasons.

Around 2002 a new Committee was formed. It was called the ECPWG. This stands for (I had to check and I was on it), Eastington Community Project Working Group. It does roll of the tongue as an acronym but if you have to keep typing out the full title it’s a bit long. The new committee comprised mainly of original stalwart committee members, new people that had moved to the Village and parents of children at Playgroup. Playgroup didn’t have another venue option and we needed a Playgroup in the Village.

Playgroup were the main users of the pavilion, there were some children’s parties and the sports groups used the changing room, a rather uninviting space with a sign that said ‘Please do not use the urinal as an ash tray’, now that’s a sign of the time!

The pavilion had to be kept going for now and folks spent many weekends and evenings down there re-cladding, re-roofing, patching, repairing, and so on to try to stop the rot but the rot was relentless.

Often a dilapidated building encourages vandalism and the pavilion was no exception, so motion cameras and a recorder were installed. To stop damage to the actual cameras mesh covers were placed over them. Weirdly no one was at the site but the motion cameras kept recording all night? On closer inspection it seems that a spider was very active webbing up the mesh cover. You can’t stop nature and you certainly couldn’t with the pavilion, mice were chewing the place to pieces’. What with that and the rot it’s a wonder that none of the PG children fell through the floorboards.

ECPWG were new, enthusiastic and prepared to give it a go, researching every aspect of funding from local fundraising (bit tiresome for the locals by now) donations, local Trust funds, 106 monies and the different types of grants.
Major grant funding was the key but if you are going to convince someone to give a grant for your project then you need to evidence it, so we started with surveys of what folks wanted from a new Community Centre. Door to door surveys were organised and that actually got some new and amazing people involved. But in general the response was poor because this had all been done before, more than once. By this time most of the village had contributed one way or another with no actual result. Often the response was ‘where’s my brick, I paid for that’. Even the Parish Council, that had previously supported improvements at the site, weren’t keen. In general everyone was rather cynical.

There was an idea that the Village Hall could be sold to partly fund the new Centre. That idea was met with furious opposition and at a meeting in the VH there was a quite hostile crowd ready to do battle to save it. This was quite quickly defused by our explanation. Thank you, you have provided the evidence that the VH is a much needed community resource as well.

It answered one vital question from potential funders i.e. ‘why do you need a Community Centre, you already have a Village Hall?’ Answer, you can’t hold a Cricket match at the Village Hall and the Village Hall has a separate and valued function for the Villagers.

We needed an Architect. A number of Architects were contacted. Some clearly weren’t interested from the start, who could blame them, a community project with a bunch of volunteers. One did do some design’s that looked a bit like the ‘Star ship Enterprise’, very weird and very expensive. But then we got lucky, one particular Architect looked at the site and was keen (or mad). Peter Holmes was later referred to as the most patient man on this planet. We couldn’t have done it without him.

The Committee and Peter were keen to make the new building as environmentally friendly as possible with energy renewal technology.

Initially we looked at ground source heat pumps but that was dismissed as too costly and quite a new technology potentially prone to failure. So we consulted with SWEA, South West Energy Agency. They did a site survey and provided a very comprehensive report, all for free. Anyone who knows the site will know that it can be extremely windy down there, what about wind turbines? No apparently, not windy enough. Really? One day parents and the children were queuing in the hall of the pavilion waiting for admission to the main room. It was extremely windy outside and there was a toddler standing just inside the entrance door when someone from outside opened it, she nearly got sucked out, poor little thing. Luckily, no harm done.

In the end the decision was to go for massive quantities of insulation, renewable materials and solar energy.

We consulted with GRCC, another free and very useful resource. They had a village hall’s advisor who was able to share experiences of other VH’s. They also had a funding expert although near the end it felt as though we were giving them more information about funding than they were giving us. GRCC – ‘I might have a potential grant for you, what have you looked at so far?’ Extensive reply on our progress. GRCC ‘OK I’ll look into it and get back to you’ click burrrr.

We drew up a Business Plan. This invaluable document was a major tool that informed grant makers of the need for the Centre and it was continually updated to keep up with funding needs as the project progressed. By the end the BP had been tweaked so many times we were on draft 16.

The was a capital project so many grant makers wouldn’t consider it however the Landfill Tax Credit Grants, (LFTs) now called ‘Landfill Community Fund’, seemed to be a good option.
The major requirement was that the project had to be within ten miles of a landfill site/recycle centre, tick, we had two. But that was complicated. First you had to enrol with ENTRUST as an ‘environmental body’, a lot for form filling and a fee of £99.00. Money we really didn’t have but the Committee agreed. The next stage was to register your project, a lot more paperwork but we managed it. That now meant that we could apply to LFT’s for grants.

Actually we applied for anything and everything that we could. We talked to and schmoozed, anyone who would listen. People came to look at the site to see how bad the pavilion was looking (a plus in some ways by then) and we started to get some interest, helped by some local event fundraising such as car boots, firework nights at the Kings Head and those unforgettable Ladies Nights!!!

By this time we had been at it for about 3 years and it was hard work but there are always upsides and one was that we also had some fun. The Committee were a brilliant group of people, meetings were business like but also a bit of a social event with lots of humour (a crucial must have if you’re embarking on something like this). We all learnt new skills and for me, a new comer to the Village, it meant meeting lots of fantastic people in and outside of the Community and making some great and enduring friendships.

But as time went on the estimated cost of the build was increasing exponentially, would it ever happen? Obviously the spoiler to that question is standing there large at life but where did the money come from in the end?
Find out next time……..