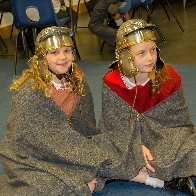 On Monday 20th May 2019, Class 5 went on a trip to the Corinium Museum in Cirencester. As we are currently learning about the Romans, it was very interesting to explore the museum and find out more about them.

After arriving at the museum, we ventured off to our first workshop. The workshop consisted of four different activities. One of the activities was called “Roman tombstones” where you had to fill in a fact file about a Roman on a large piece of wood. We also learned about “Isotope Analysis” which is explained below.

After everybody had taken their turn, we decided to have a wander around the museum and find out some more interesting things about the Romans. We each had a question sheet and we had to look for specific artefacts from in and around the displays.

Next up was workshop two; again there were four different activities to participate in. One of them was called “Pottery pieces”. The object of the game was to create what was once a Roman pot out of broken pieces. It was quite tricky. Another activity was where there were large magnetic boards and little magnetic mosaic shapes, and you could make up patterns that the Romans might have used thousands of years ago!

Once we had finished workshop two, we had lunch and a final explore of the museum. On leaving, we thanked the staff for our amazing time and travelled back to school for the end of the day.
To sum up, it was a very thought-provoking, interesting and brilliant day. I would fully recommend it to anyone currently studying the Romans who would like to learn some crazy, unbelievable facts about Roman life. We are now looking forward to our next trip- PGL!

ISOTOPE ANALYSIS
This is a means of finding out where people came from. When you pass away and your skeleton is eventually found, people can look through your teeth and bones and they can find out, from the minerals stuck in them, things like where you were born and where you are from because every place in the world has its own different minerals!

The Romans used to eat snails fattened on milk – lovely!