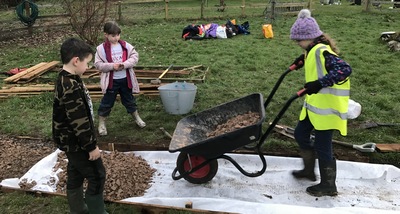 Winter Progress at the Children’s Pond in  the  Coneygree Community Orchard.
The mild weather this winter has allowed significant progress at the Community Pond. The “before” photos shows ECO volunteers re-profiling the area around the pond (we love our big toys).

The “after” picture details what is still a work in progress but there’s water in the pond, a couple of willow sprigs planted and most of a set of steps built. The steps will allow barrows or even wheel-chairs to be bumped up and down whilst removing the likely hazard of a slippery slope.

The trees were planted by the after-school club of 7-to-10-year-old children under the guidance of Raffles Forest School who also made access to the area of the pond possible. If you look closely on the shed wall, they have also made a sign out of wood discs to say “Community Pond”.

The children have also made bird boxes and insect hotels.

Completing the linking of the pond to the main orchard path is also underway. The children tried their hands at path building and achieved 8 metres of path edging, weed-suppressant underlay (see some white underlay on the right) and base layer of roadstone. Later in the summer, all the paths will be finished off by ECO volunteers with a fine layer of 3mm dust, like the main orchard path, which is wearing well after 4 years of foot, paw and wheel traffic.